Get fresh music recommendations delivered to your inbox every Friday.
We've updated our Terms of Use. You can review the changes here.

by Church on Monday 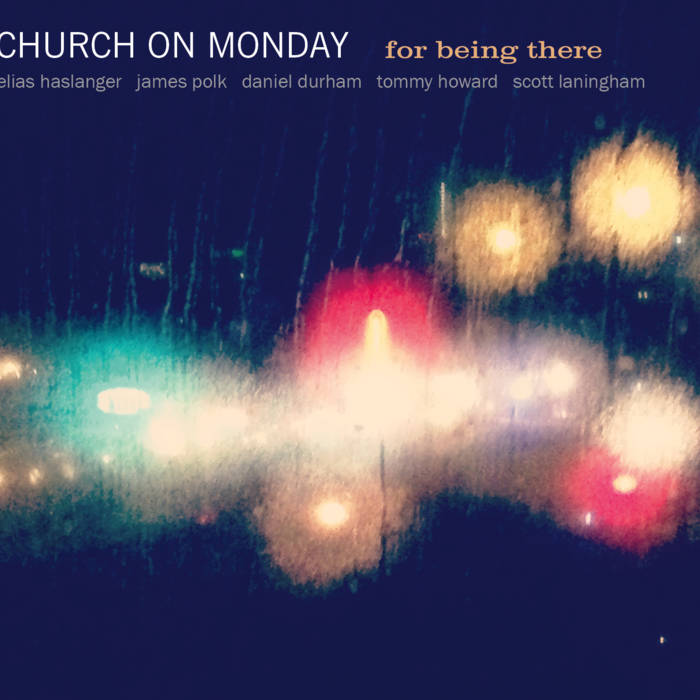 Cherrywood Records is pleased to announce the release of For Being There, the latest recording from critically acclaimed saxophonist, composer and arranger Elias Haslanger and his award-winning band, Church on Monday.

For Being There was recorded live during three shows in early 2019 in front of enthusiastic crowds at The Continental Club Gallery in Austin, TX. The recording features 3 original compositions by band members and 5 songs from the jazz lexicon, and it truly captures the spirit and energy of Church on Monday at their weekly residency at The Gallery, which has spanned over 6 years.

Church on Monday at The Gallery is an Austin institution and the band consistently fills the venue with a passionate audience of regulars who love jazz. The 5-time Austin Music Award winning band is led by Elias Haslanger and anchored by Dr. James Polk, the legendary organist who spent years as the pianist, organist, composer and arranger for Ray Charles. The group also includes drummer Scott Laningham, bassist Daniel Durham and guitarist Tommy Howard, who have built a rapport and chemistry as a band over the last 5 years that is rarely heard or seen.

For Being There is an original composition by Elias and the title track of the new recording. Elias wrote this piece at the request of his friend, Alejandro Escovedo, who invited the band to perform at The ACL Moody Theater for Escovedo’s United Sounds of Austin in 2014. “I wrote this for my friend Alejandro, and I also wrote it for the band and most especially for our loyal audience for being there week after week, year after year,” says Elias. “We pour our hearts and souls into our weekly live shows and I want the folks who come see us to know how much we respect and appreciate their participation. This recording encompasses the essence of who we are and what we do at The Gallery.”

Elias Haslanger has played and recorded with Ellis Marsalis, Maynard Ferguson, Charlie Hunter, The Temptations, Asleep at the Wheel, Alejandro Escovedo, Christopher Cross and numerous others. He has released 7 critically-acclaimed recordings as a leader which have been played on radio stations around the world and reviewed favorably in DownBeat, JazzTimes, Billboard, Cadence, Texas Monthly and the Austin Chronicle. He is an active performer, performing over 150 shows at venues across the United States.

“Haslanger is a major talent, both as a composer and instrumentalist whose future has almost unlimited potential and should be regarded in national terms.”
-Michael Point, DownBeat

Over the span of his 25-year music career, native Texan and Austin resident Elias Haslanger has carved a unique and distinguished place in jazz history as a saxophonist, composer, and band leader, whose playing and writing has drawn comparisons to John Coltrane, Sonny Rollins, Ben Webster, and Wayne Shorter. ... more

Bandcamp Daily  your guide to the world of Bandcamp

Quelle Chris joins the show to discuss his most recent release, "DEATHFAME"